When I was much younger and had crushes on boys who didn’t like me, my mom always consoled me by saying “It is better it didn’t work, he wasn’t Cuban, so he wouldn’t understand why you need a pastelito de guayaba.” She was of course kidding but it did, at least on some level, ring true; I do love those damn pastries!! So when I first took Tom, my midwestern boyfriend, now husband, to Miami and he fell in love with these I saw it as a sign!! He understood why I needed a pastelito de guayaba!! He was the ONE!!!

I have a million memories of summers spent in Miami with my family where my dad would call me into his room and say “Emmy, bring me a pastelito de guayaba from Gilberts” and so I would have to go out and drive to casa del coño to get him one*. I would of course get myself one, and maybe a croquetica, but that’s another post. So of course when Tom and I go to Miami, we drive to Gilberts and get ourselves pastelitos de guayaba. Here in Seattle though, I can’t seem to find them anywhere and Tom gets quite the craving for them; esta tan aplatanado!** I tried making them with guava paste and puff pastry at home and they came out ok. Sadly, try as I might I couldn’t get the glaze on the top that I LOVE on the pastelitos from back home. That was, until I added a teaspoon of sugar to the egg wash. That was the trick and now I make the best damn pastelitos. The puff pastry is flaky and crispy and the interior is gooey and sticky and sweet. I find that the brand of puff pastry doesn’t make as much a difference as does the brand of guava paste, if you can find it, go with Goya.

* Casa del coño is a Miami Cuban saying that means “very far away”
** Estar aplatanado is another Miami Cuban saying. It translates literally into “to be very bananaed” but means to be a non-Cuban who acts like a Cuban. Usually the saying is that Cuban wives aplatan their husbands. I guess I have succeeded 😉

Crack egg into a little bowl

Add sugar and mix together

Bring puff pastry to room temperature and place on cutting board

Paint the edges with the egg wash so that the pastry will stick together.

Fold over and press pastry together to close. I like to use a fork to make a pretty pattern and ensure a good seal.

Video “How to assemble a Pastelito de Guayaba”: 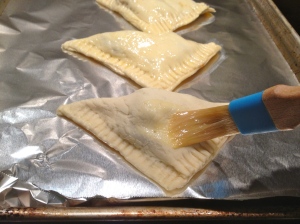 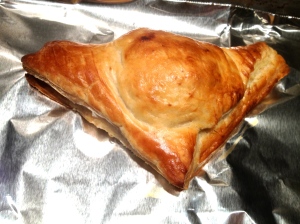 Bake for 16-18 minutes or until golden brown and delicious

Remove from the oven and allow to cook for at least 10 minutes, otherwise you will melt the lining of your mouth off.