I complain a lot about living in Seattle. Some of what I whine about is true; the weather sucks, the winter days are nonexistent, everything closes way too damned early and the city feels more like a very large town rather than a “real city”. Most of the time, however, I really just need a good slap in the face, because frankly, if you have to get stuck living somewhere, this is not a bad town to be stuck in at all.

For a foodie like me, one of the best things about living in Seattle is being able to go to Pike Place Market whenever I feel like it. I know it’s touristy, but it also has some of the freshest seafood and vegetables in the area. Not to mention a Mexican/Latin American store that actually stocks things I can’t find anywhere else in the city. One of my favorite stalls has always been Pike Place Fish Market, smack in the middle of the market, where they throw salmon. The guys who work there always seem to be having a good time, the fish looks very fresh and more importantly I can never smell it when I walk by. That said, I had never actually bought anything from there because, you know, only a stupid tourist would do that. But then I realized something, the stupid tourists seemed to be having a good time and getting an excellent product. So during a recent visit I slapped myself in the face, walked up to one of the fish mongers and asked “what’s good?”

As it turns out, the guy was not only knowledgeable but also honest. He told me that the salmon was wild and always a good choice but that since it wasn’t salmon season it was pre-frozen and thawed as needed. While I have nothing against pre-frozen seafood, especially if it’s a choice between that or farm raised salmon, I decided to ask for something fresh. He pointed out their black cod which was not only cheaper but which I had never had before. I asked how long I should cook it and he said about 18 minutes at roughly 375F. Armed with my fish and cooking time I went to scavenge the market for ingredients that would compliment a fatty fish. This is what I came up with and I will be damned if it wasn’t one the most delicious fish recipes I have ever had. I guess the moral of this story is; slap me. 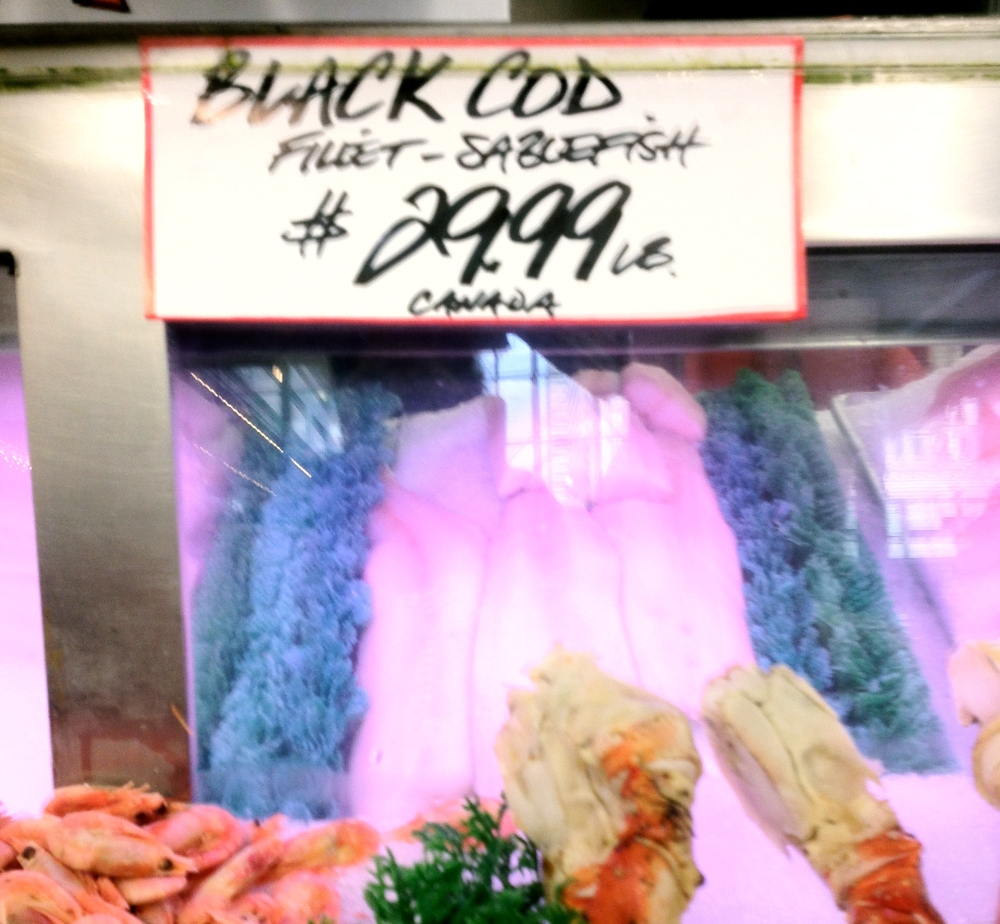 Directions:
Pre-Heat the oven to 425F

Chop the Chorizo into roughly centimeter-cubed pieces, chop the chili, slice the onion and finely chop the cilantro. Place a skillet over low heat, add the olive oil and chorizo. Cook until the oil has turned a nice orange-red color and the chorizo is browned around the edges, about 5-10 minutes depending on the size of the chorizo and the heat of your stove (the slower the better).

Turn the heat up to medium-low then add the red chili and sauté for another minute or two, or until it has gone soft. Next add the onions, salt and pepper and cook until the onions get soft and a bit sweet, about 4-6 minutes. Next add the garlic and sauté for another minute, or until you can just smell the garlic. Remove the pan from the heat, add the wine and cilantro and stir to combine. The residual heat will cook the wine and cilantro just enough without burning them. It’s best to let this cool for 15 minutes before you put it on the fish, but if you are in a hurry you can skip this step without much flavor compromise.

Place the side of cod on a half sheet tray/baking sheet (I line mine with aluminum foil for easy clean up) skin side down. Season the flesh side of the fish with a little salt, drizzle a little bit of olive oil over it so that the fish is well lubed and add the chorizo mixture over the top, making sure to cover as much of it as possible. Place in the oven. If you have a convection oven turn on the fan, if you don’t, rotate the pan halfway through the cooking time. Cook for a total of 18 minutes. While 18 minutes worked for me in my oven, you will know the fish is done when it hits an internal temperature of between 116 and 120. If it goes over 125 you have over cooked it, so keep an eye on it.

Remove from the oven and let sit for a few minutes. I don’t rest fish as much as I do other meats but it still benefits from a little rest. Transfer to a nice serving platter and garnish with lemon wedges. Only thing left to do is apply to your recently slapped face.

I served this with pasta with Chimichurri Pesto, but you could just as easily serve it with a salad or rice pilaf.