My father loved going out to eat, so about once or twice a week we would go out as a family. I think for him there was no greater outing. He had his favorite restaurants, most of them Cuban, and he preferred to go to the same ones often. Of all the restaurants none was more loved by him than La Covadonga. It is a tiny little restaurant in West Miami where the owner knew my father by name and treated him with such respect that it led my brother to believe that my father must be in the Mafia and let me tell you, this would have been a great Mafia hangout. The decor was kitchy, with highly lacquered, shiny wooden walls, port holes with painted pictures of the ocean behind them and fishing net stretched across the ceiling. My father however was not interested in the decor, he came for the food. They cooked traditional Spanish and Cuban seafood dishes. Having studied in Spain and being raised in Cuba this was my father’s idea of heaven. So on big occasions, and not so big occasions, we would go have dinner here. Dinner always started with their Camarones Al Ajillo. I remember it came in a little dish, the terra cotta kind you get in Spain, with 4 shrimp and pipping hot. The Shrimp would be sizzling in Olive Oil and Garlic and it would smell like heaven. As little kids we wanted to dig right in but my dad made us wait. He used to say “Wait, I have to prepare the bread for you first” and he would take a piece of the Spanish baguette they had on the table and dip into the hot garlic oil, then he would sprinkle salt on that and give it to us. We would fight for who got the first one. Once I moved away from Miami and started eating out I saw that people in America call this dish Shrimp Scampi, but it is not the same, not at all. This recipe is as close to the Covadonga’s Camarones al Ajillo as I can get and every time I make it the smell brings me back to those times with my dad. I now serve it with pasta instead of bread to make a complete meal. If you want to be more Spanish about it serve it with peeled and boiled potatoes.

8 Cloves of Garlic (6 if you have the big ones)

1 tsp Red Pepper Flakes (Covadonga didn’t have this in theirs but it’s my recipe now and I like it, add more or less to taste)

Step 1: Cook your pasta according to package instructions. Strain, reserving a cup of the pasta water.

**The Shrimp cook very quickly so 3-4 minutes before the pasta is done is when you should start making the Shrimp.** 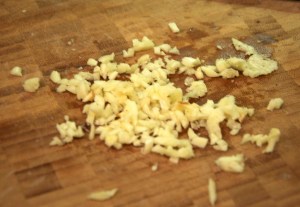 Step 2: Chop your Garlic Fine. Do not crush it, you need it to be diced so that you can cook it for a minute or so 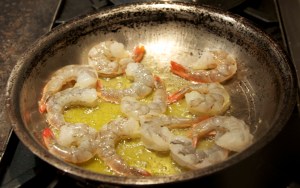 Step 3: Place your pan over high heat for 1 minute. Add the Olive Oil and then the Shrimp.

Step 4. Once the Shrimp is pink on one side add the Garlic and Red Pepper Flakes

Step 5: Saute for another minute or just until the shrimp turn pink and you can see no more grey. 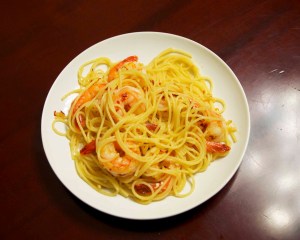 Step 6: As soon as the shrimp is done (pink) toss in the pasta and combine in the skillet. If there is not enough liquid to make a sauce add a tablespoon of pasta water at a time until you reach a consistency you like.